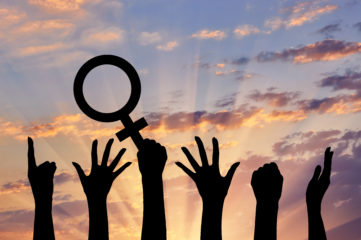 Opposing Equal Rights for Men and Women is opposing Human Rights.  Why would two human beings who are equally – as equally as possible – qualified, equally educated, equally proficient, capable and “successful” receive a different monetary salary within the same organization?  If one of these human beings is a female and the other a male, then this is what often happens in the United States of America.

In 1923, over ninety years ago, a woman and suffragist leader called Alice Paul first introduced the Equal Rights Amendment to Congress.  The aim of the amendment was essentially to eliminate gender-based discrimination.  Section 1 of the original Equal Rights Amendment proposal read, “Equality of rights under the law shall not be denied or abridged by the United States or by any state on account of sex.”

The President’s Commission on the Status of Women was established by John F. Kennedy in 1961, with Eleanor Roosevelt appointed as head of the organization, and it was set up in the hope of providing a solution to female discrimination in education, work force, and Social Security.

Yet, despite such strong, influential people and organizations pushing for an ERA, such an amendment has still not been ratified to this day.  Other powerful people have strongly opposed the ERA and put forward convincing, to some, arguments for why the ERA would be detrimental to women.  One such person was Phyllis Schlafly.

Phyllis Schlafly led the Stop-ERA campaign and suggested that ratification of the ERA would mean changes such as courts no longer tending to favor mothers for child custody in divorce cases and the introduction of women being drafted to war.  Phyllis Schlafly used scare tactics to persuade people to support her in her fight to have the ERA not written into the U.S. Constitution.  She also appealed to women, and to men, especially males who favored a patriarchal society, by apparently glorifying the picture of a traditional American woman.  Schlafly painted the picture of a doting and dedicated wife and mother, with an apron and superb apple pie baking skills.  I ask again, “Can a feminist bake apple pies?”  Well, more importantly, “Does she Want to bake apple pies?”

An Equal Rights Amendment is a necessity.  Without such an amendment to the United States Constitution, women are legally not protected when it comes to equal opportunities and justice.  For example, violence against women is prevalent, but state laws (differing from state to state) and federal laws remain highly inadequate for dealing with such serious issues.  The current laws related to women’s rights in the United States are not nearly enough to promote gender equality or to safeguard women against gender-based violence.  Ratification of a comprehensive and sensible ERA is needed, urgently.  And merely, but at the same time crucially, it’d be a step towards a greater embrace of basic human rights for women.

4 thoughts on “Opposing Equal Rights for Men and Women!”